I Am Mother is a 2019 Science Fiction movie directed by . It stars Clara Rugaard, Hilary Swank, Rose Byrne, among others.

I Am Mother is currently rated 6.6 stars on the ReelBugs scale. 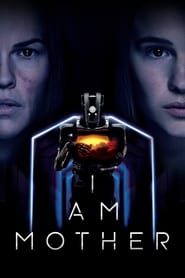 A teenage girl is raised underground by a robot "Mother", designed to repopulate the earth following an extinction event. But their unique bond is threatened when an inexplicable stranger arrives with alarming news.

I Am Mother Images

I Am Mother Summary

A teenage girl is raised underground by a robot "Mother", designed to repopulate the earth following an extinction event. But their unique bond is threatened when an inexplicable stranger arrives with alarming news.

I Am Mother Cast

Check out I Am Mother - Parents Guide

What was Netflix thinking? They really should have released this on Mother's Day.

I fear no man
But that thing...
Mother running
It scares me

The comment section is calling for a sequel, but I want a prequel. I want to see how the machines and AI caused the extinction of humans.

If you are reading this, do NOT watch this trailer, and just watch the movie instead. You have been warned.

Watched this movie the other day... I really enjoyed it...
But when I learned that this movie was "on a budget" and that Mother was not CGI but a person wearing a costume, I was really blown away

The young girl in this acted amazingly, that or she was really well directed but either way I LOVED this film! Great job by All!!!

This trailer spoils waaaayyyyy too much in my opinion

Sequel: I am Grandmother

Everybody gansta till mother starts running.

This was a really good movie,100% would recommend!

That running robot is more scary than pennywise

i was team mom the whole vid , srry

Brilliant movie! I am so glad I didn't watch trailer before I've seen a whole film

bUt iS HiLLarY sWaNk hOt??

This was brilliant and beautifully done! People if you haven’t yet! You absolutely have to watch this!

Mother ran and i said "wtf" im scare . But she stop and speak with this cute voice than i forget all .

0:04 Me running down the hallway to get pizza rolls at 3 am

this trailer reveals basically everything.

This is why i don't watch trailers because all they do is ruin the movie, glad i watched the movie before i came here

ANOTHER GREAT MOVIE FROM NETFLIX ! Shows the danger of artificial intelligence ("Mother") when it becomes "self aware". Just as in the "Terminator" movies, the AI mastermind decides humanity is a danger to its own existence - and the existence of the AI. In this movie, "Mother" is attempting to breed & train a "master race" to replace the devastated humanity outside the "incubation center". Notice the droids are growing corn - in preparation for their "children" to return to the surface. So, unlike the "Terminator", they don't want to DESTROY humanity, just recreate it "in their image".

This is THE best Sci-Fi movie I’ve seen for a very long time! Don’t think that trailer gives everything out :) it does not spoil anything

so, how many plot twist do we put in the trailer?
Netflix: Yes.
Edit: Yeah I see I was a bit exaggerating rhanks for the comments!

thanks for trailer we dont need to watch anymore.Because we just watched everything in trailer.

Movies Similar to I Am Mother