Fear the Walking Dead is a Action & Adventure Drama TV Series created by . It stars Lennie James, Alycia Debnam-Carey, Colman Domingo, among others.

Fear the Walking Dead is currently rated 7.3 stars on the ReelBugs scale. 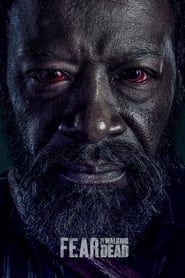 What did the world look like as it was transforming into the horrifying apocalypse depicted in "The Walking Dead"? This spin-off set in Los Angeles, following new characters as they face the beginning of the end of the world, will answer that question.

What did the world look like as it was transforming into the horrifying apocalypse depicted in "The Walking Dead"? This spin-off set in Los Angeles, following new characters as they face the beginning of the end of the world, will answer that question.

Rick is probably sleeping at this time...

there are so many zombie tv shows, but this one does look interesting, I'll give it a watch

Lexa brought me here #The100

They should show the outbreak from the government and military perspective. Showing the extent of the outbreak across the world, not just in the states.

Watching in 2020 when this is kinda going down for real

how does the military lose against mindless zombies

Alycia left "the 100" to be in this show ,lexa was a great character in the 100 so This better be god damn good

Ok, I finished the 2nd season. I like the show despite all the hate. There's just one thing that's really bugging me. The show has been advertised as the "Prequel" where it's being shown how everything began. Now for being a show that's supposed to tell the backstory of the outbreak, it has been really rushed. I expected them to stay in LA for longer and not just jumping to the "Everyone is a walker now and everything is dead" status. Currently it's literally just TWD from a different family's point of view. Everything went down way too fast and died too quickly . The downfall of humanity should've been shown troughout 2-3 seasons and not barely 1. Not to mention that the military should have been way more prominent

damn Alicia is really getting into this apocalyptic thing. first The 100, now FTWD, whats next for her? will she fight the white walkers in Game of Thrones xD still a hot girl in every one of them though!!!!

I'm so sad how FTWD change with season 4, this last season was so bad and they killed alls characters of the show, RIP FTWD(Season 1-3).

Now that Lexa died in the 100, this show better be good bc Alycia is bae af

With this new virus going on in China, who knows it might trun into real life. If someone turns into a zombie, I know what to do thanks for these type of shows.

I don't like nothing about Zombies, but I'm gonna see this because of Alycia 💙💙💙 I can't believe she left The 100 for this 😪 LEXA forever